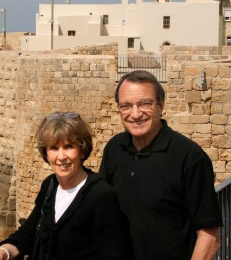 The Bentleys discuss the fascinating story of how the BYU Jerusalem center came to be in this 9th Dialogue podcast taken from a lecture presented to the Miller-Eccles group. They also reported on the current state of Church activities there.

Mormons have a long history of interaction with the Holy Land, beginning with Orson Hyde’s dedication for the gathering of the Jews in 1841, and continuing through numerous re-dedications by a variety of LDS apostles in later years. Many of us do not know that there were some fifty years of organized missionary efforts by the Church in the Holy Land, or that there was an attempt to establish an LDS colony there in the nineteenth century.

Joseph Bentley is a graduate of the University of Chicago Law School, where he became acquainted with Dallin Oaks, then a law professor. Out of this relationship grew several scholarly articles on the steamship “Nauvoo” and its relationship to Joseph Smith’s bankruptcy. After graduating from law school, Joe became a member of the real estate department of the global law firm of Latham & Watkins, and in due course a partner in the firm, where he practiced for thirty-five years until retiring in 2003. During that time he served as a bishop, stake president, and director of public relations for Orange County. After retiring from the active practice of law, Joe served as a legal consultant to the Joseph Smith Papers Project.

Marilyn Bentley received her BA from BYU with a double major in piano performance and theory and has served the Church in many musical callings through the years. Many of the Bentleys’ friends have attended the wonderful four-piano recitals she has given in her home with some of her fellow pianists through the years. Marilyn has also served as ward and stake relief society president  in the Newport Beach area, accomplishing all this while raising five children and her husband.

The Bentleys now are the proud grandparents of fourteen grandchildren.