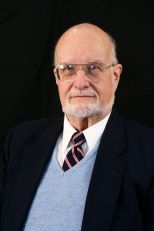 Armand L. Mauss, emeritus professor or sociology and religious studies at Washington State University and author of several books and a great many articles on a variety of Mormon issues, including his seminal The Angel and the Beehive: The Mormon Struggle with Assimilation (1994) took questions from a panel of Miller-Eccles readers posing questions to Armand relating to his recently-published memoir, Shifting Borders and a Tattered Passport: Intellectual Journeys of a Mormon Academic.

Richard Bushman wrote, “[Armand] Mauss’s contribution to Mormon scholarship and to sociological theory was to argue that over time Mormonism had adjusted the degree of strain with the rest of the world. This ongoing adjustment phenomenon had not been recognized by sociologists before Mauss discovered it in Mormonism. Now it has become a significant corollary to the theory of new religious movements. Mauss always stood at the shifting border between the university and the church, ready to step across onto the church side whenever he could make a difference.”

Levi Peterson, one of Mormonism’s greatest creative writers, wrote that Armand’s new memoir “provides a fascinating look into both Mauss’s writings and his personality. It will appeal to professional sociologists, to lay readers interested in understanding the discipline of sociology better, and to multitudes of Mormon readers who wish to understand the intellectual implications of their religion.”

A lifelong member of the LDS Church, honoree Armand Mauss earned his B.A. from Sophia University (a distinguished Jesuit institution) in Tokyo, where his father had served as mission president. He then received his both his M.A. in history and his Ph.D. in sociology from the University of California, Berkeley. He was a longtime professor at Washington State University and has been a visiting professor at a number of universities.

Armand has been the editor of the nationally recognized Journal for the Scientific Study of Religion. He has also been a key player in the rise and survival of Dialogue: A Journal of Mormon Thought, serving for twenty years on its editorial or advisory boards, and then for ten years on Dialogue Foundation’s Board of Directors. He was also intimately involved in the formation of the Claremont Mormon Studies program and was a visiting professor there.

Professor Mauss has written several books and scores of academic articles and has received a number of awards from the Mormon History Association and from Dialogue for writings. One of his most well-known books is The Angel and the Beehive: The Mormon Struggle with Assimilation, published in 1994. He also authored All Abraham’s Children: Changing Mormon Conceptions of Race and Lineage, one of the best sources for the history of the gradual change in Church teachings on race. Several months ago, Armand published his memoir, titled Shifting Borders and a Tattered Passport: Intellectual Journeys of a Mormon Academic.

Armand served a mission to the New England States and has served as a professional consultant to the Presiding Bishops Office and the Research Information Division of the Church. He is married to the former Ruth (Hathaway) Mauss and they are the parents of six sons and two daughters.