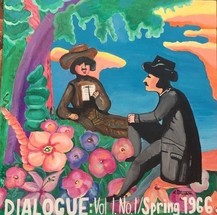 The 31st Dialogue podcast, released in honor of our Dialogue Jubilee on September 30, has past editors reminiscing and “Celebrating 50 Years of Mormonism’s Leading Journal” as recorded at the Sunstone session of the same name. From the Sunstone abstract: “Beginning with its first issue, which showed two people sitting under a tree engaged in
conversation, Dialogue: A Journal of Mormon Thought has encouraged dialogue by publishing leading-edge scholarly articles, personal essays, fiction, poetry, sermons, and other writing that have engaged Latter-day Saints on vital subjects within Mormonism and in its interface with the world. Join founders, editors, and others in this retrospective celebration.

ROBERT A. REES is a scholar of religious and Mormon studies who is involved in interfaith work, humanitarian service, and the peace movement.

L. JACKSON “JACK” NEWEL has been a professor at the University of Utah, but took leave to serve as president of Deep Springs
College from 1995 to 2004.

CHARLOTTE ENGLAND is a writer, artist, and musician. She is writing sketches of her life together with her late husband, Eugene England, and gathering material for his biography.

G. WESLEY “WES” JOHNSON began his work as an editor under John Updike at the Harvard Lampoon. Especially of note is his research and publication in the new field he helped establish, public history.

MARTHA BRADLEY-EVANS is a professor in the College of Architecture + Planning teaching history and theory classes, for which she has won many awards.