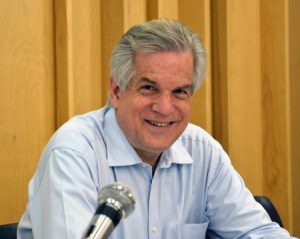 The 30th Dialogue podcast features Board Member Gregory A. Prince, who spoke on his new book, Leonard Arrington and the Writing of Mormon History, published by the University of Utah Press at a recent Miller Eccles presentation.  From the Miller Eccles website: “Dr. Prince earned doctorate degrees in dentistry and pathology from UCLA. A prodigious student of Mormon history, he is also a prolific author of numerous articles and books on Mormon topics.

THE TOPIC: Leonard Arrington is considered by many the foremost twentieth-century historian of Mormonism. But Arrington’s career was not without controversy. A new in-depth look at this respected historian and gives readers insight into the workings of the LDS Church in the late twentieth century. In 1972, Arrington was asked to serve as the official church historian, thereby becoming the first—and thus far the only—professional historian to hold that title. While the output of and from that division moved Mormon studies to a new level, the shift of historiography from faith promotion to scholarly research and professional analysis was unacceptable to some powerful senior apostles. In 1980 the History Division was disassembled and moved to Brigham Young University, where Arrington’s broad influence on Mormon history remained strong. This biography is the first to draw upon the remarkable Arrington diaries (over 20,000 pages) and it is supplemented by Prince’s interviews of more than 100 people who knew or worked with Arrington. The book provides background to continuing LDS struggles with member scholars, while illuminating the life of one dedicated historian.

THE SPEAKER:  Greg Prince was born and raised in Los Angeles. He served a mission to Brazil and then attended UCLA for six years, earning doctorate degrees in dentistry and pathology. He moved to Maryland in 1975 to work at the National Institutes of Health, and over a four-decade career in biomedical research, co-founded a company that pioneered the prevention of RSV pneumonia in high-risk infants. He has published more than 150 scientific papers, and, importantly for us, also published several books on Mormon history, including the remarkable David O. McKay and the Rise of Modern Mormonism, which won the Mormon History Association’s Best Biography award in 2006.