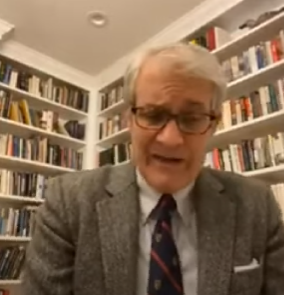 We are excited to announce the new monthly Dialogue Fireside. Our first fireside was October 25th with Thomas B. Griffith teaching us on “A Latter-day Saint Approach to Politics.”

Thomas Griffith on was appointed to the U. S. Court of Appeals for the D. C. Circuit in 2005 by President George W. Bush. Just last month he stepped down from that court. His legal career before becoming a judge included service as the general counsel of BYU, the chief legal officer of the United States Senate, and as a partner in a law firm in Washington, DC. Tom is a native of Washington and graduated from BYU in Humanities and Comparative Literature and earned his JD from the University of Virginia School of Law. He is currently a Lecturer in Law at Harvard and the University of Virginia. Tom joined the Church as a junior in high school in McLean, VA, served a full-time mission in southern Africa, and has held a variety of teaching and leadership positions. Before embarking upon a legal career, he was employed by the Church Educational System and directed its programs in the Baltimore, MD region. Tom is a member of the Advisory Board of the Neal A. Maxwell Institute for Religious Scholarship and was the founder, along with Terryl Givens, of the Temple and Observatory Group, which is committed to the view that developments in historiography should be welcomed, explored in frank and open discussion, and incorporated into Latter-day Saint self-understanding.