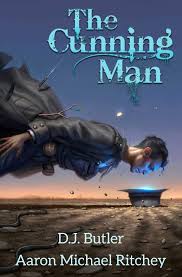 Host Andrew Hall is joined by the authors D. J. (Dave) Butler and Mattathias Westwood to discuss Dave’s recent fantasy/adventure novels, including the steampunk City of the Saints, the early American epic fantasy Witchy War Series, and the historical (1930s Utah) fantasy The Cunning Man. Reviews of both the Witchy War Series (by Mattathias) and The Cunning Man (by James Goldberg) appear in the Fall 2020 issue of Dialogue.

Mattathias stated in his review, “The world of D. J. Butler’s Witchy War novels is an old-growth forest, a kaleidoscope, the stomach of a shark—growing thickly with a thousand different things, constantly shifting to reveal new patterns and connections between its disparate elements, devouring everything in its path and mixing them all together in one crowded room . . . Butler’s alternate America, filled with a mass of peoples and nations, sharply divided by differing interpretations of sacred texts and the nature of the cosmos, and steeped in ritual traditions and ways of seeing reality beyond the material, is a place where old things become new and all belief systems are seen as tantalizing hints in the direction of a greater whole. And while this world contains no Mormons, nearly every page resonates in fascinating ways with Latter-day Saint scripture and belief.”

James Goldberg, in his review of The Cunning Man, wrote, “[It] shows what is possible when Mormon writers are willing to engage with Mormon imagery and themes. Surprising and strange, with a lingering richness in its repurposing of religious language and imagery, The Cunning Man deserves to be part of a discourse of who we are, where we’ve been, and what we owe each other as a people.