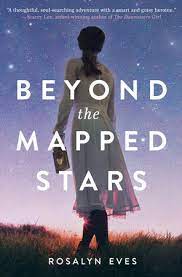 Dialogue Book Report #16: Beyond the Mapped Stars by Rosalyn Eves

Rosalyn Eves teaches English at Southern Utah University and writes young adult novels in her spare time. She earned a PhD in English from Penn State in 2008, where she wrote about Women’s spatial rhetorics in the nineteenth-century American West, focusing on the rhetorics of four very different women of the West, including Eliza R. Snow. She has written a young adult historical fantasy trilogy, set in 1848 Austria-Hungary, starting with Blood Rose Rebellion, which won a Whitney Award for best YA fantasy. Her newest novel, Beyond the Mapped Stars, is a YA historical set in Utah, Wyoming and Colorado around the time of a 1878 solar eclipse, and features a 16-year old Mormon protagonist.

Lisa Torcasso Downing. Lisa has served as fiction editor for Sunstone Magazine and Irreantum. She has published three novels for middle grade readers, her short stories and essays have appeared in multiple publications, and recently she has been active in writing about issues of feminism and gender in Mormon society, which you can read at her blog Life Outside the Book of Mormon Belt.