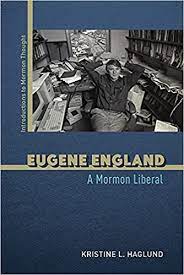 Kristine L. Haglund joins Andrew and Cristina to talk about her book, Eugene England: A Mormon Liberal. Kristine is a writer, editor, and independent scholar, and the former editor of Dialogue. England championed an optimistic Mormon faith open to liberalizing ideas from American culture. At the same time, he remained devoted to a conservative Mormonism that he saw as a vehicle for progress even as it narrowed the range of acceptable belief. Haglund views England’s writing through the tensions produced by his often-opposed intellectual and spiritual commitments. Though labeled a liberal, England had a traditional Latter-day Saint background and always sought to address fundamental questions in Mormon terms, including as the founder of Dialogue.