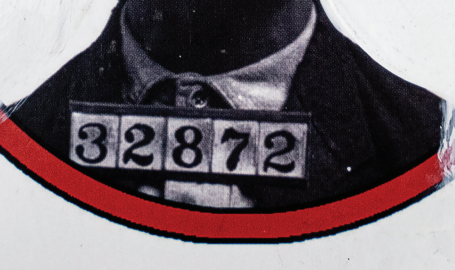 The Mask We Must Wear in a Racist Society: Reflections of Black Suffering in the LDS Church Through Art

I reflect upon a work of art by Marlena Wilding, a Black female artist with ties to Utah and Mormonism. Her artwork is a stark representation of the complex nature of living while Black in a racialized society. Specifically, in “Untitled” (the cover of this issue), Wilding’s artistic rendering of a vintage photograph of an incarcerated Black man speaks to the historical suffering and contemporary realities of white supremacy unleashed in thought and practice on Black people, especially Black men and boys.

With a streak of white paint across the subject’s mouth, Wilding forces the viewer to reflect on the saliency of his prison number and the blank stare in his eyes, which are often described as the window to the soul. “Untitled” grapples with the centuries-old white racist framing of Black men as rapists, criminals, and violent thugs. The irony being that the historical context in which these stereotypes derived were falsely reported crimes after emancipation as a means to justify the death or imprisonment of Black men. These racist ideas are ingrained in American society; they are not only seared into the minds of white people, but these frames deeply affect Black people’s sense of self-worth as well as their connectedness and belonging in the world. The coupling effect of both the Black and white psyche has made upward mobility for Black men nearly impossible and downward mobility into the school-to-prison pipeline more likely.

These unchecked white racial frames were handed down generationally and provide the backbone for anti-Black racism embedded within the “justice” system that keeps Black men in prison at an alarming rate. As Wilding’s collage suggests, even those who manage to break through many aspects of white racism and gain some material “success” still remain imprisoned. They are held captive to the schizophrenic whims of white society’s toxic institutions and must navigate the terrain of white ignorance and cruelty. “Untitled” symbolizes the exhaustion of emotion work performed by Black people who live, work, or worship in segregated white spaces. Within these lethal places, Blacks painstakingly work to project safety to whites through smiles and affability while avoiding inflammatory rhetoric and practicing self-restraint in the face of racist comments and even comic relief at their expense. This is the mask we wear.

As a Black Latter-day Saint, I can relate in part to what Wilding must feel as she pours her soul onto her canvas. In a community that is supposed to affirm you, Black members of the LDS Church often find themselves apologizing or making excuses for blatant racist folklore perpetuated by white men who are enabled by white women. The LDS Church is a conservative, top-down leadership consisting entirely of men, over 90 percent white and less than 2.5 percent Black. The expectations are that Blacks subscribe to white norms and foundational racist beliefs of the Church. The politics of the LDS Church have oppressed, punished, and stigmatized Blacks. Being made to live with such madness where white-skin privilege exists and white culture is more highly valued is a form of psychological violence.

Many Black Latter-day Saints have admitted they suffer from imposter syndrome, where they have very little contact with the wider Black community (through no fault of their own) and, thus, feel like a fraud. They also find themselves struggling to understand the codes (language, culture, norms) in Black spaces, which leaves them vulnerable to intergroup prejudice from other Blacks, especially in school-aged children. Being too white for Blacks and too Black for whites, Black folk who live in such places withstand the pain of racial discrimination (conscious or unconscious) from white supremacy in all areas of life while grappling to figure out who they really are under the mask.

This piece of art was created during Wilding’s time as a student. She was met with stark criticism from her art professor at Brigham Young University, who referred to her work as “shock art.” In his disregard of her work, she felt a humiliating rejection of her expression of the Black experience, particularly coming from someone whose opinion she respected and valued. And based on that interaction, she hid this piece for the next six years. His inconsiderate remark plays on the white supremacist thinking that Black folk should only be seen rather than heard. Not ironically, the stroke of white paint across the subject’s mouth represents the silencing of the Black voice.

Indeed, the silencing of Black people who dare to use their talents in the service of social justice is commonplace. White Americans live and operate in a social milieu that buffers and insulates them from the race-based trauma that Black Americans face. White people, according to Robin DiAngelo, are fragile beings in the sense that they construct elaborate defense moves to preserve a racial equilibrium that advances their own white interests. For white people, these actions include outward displays of anger, violence, fear, guilt, and behaviors such as argumentation and denial, all meant to avoid stress-inducing “racetalk” many are unprepared to address. Yet, Wilding and other Black artists continue their perilous work in the face of white resistance.

The mask that Black LDS members wear forces them in one of two directions—either capitulate to the racist ideology in the Church or fight with half-hearted activism in a sea of Republican-style opposition. Those who chose to fight often eventually leave out of sheer frustration. Those who stay find themselves embattled in a faith blind to the realities of racial oppression. Both come at a cost, the effects of which play out on the Black body and mind. W. E. B. Du Bois penned, “It is a peculiar sensation, this double-consciousness, this sense of always looking at one’s self through the eyes of others, of measuring one’s soul by the tape of a world that looks on.” He went on to further explain, “One ever feels his two-ness—an American, a Negro; two souls, two thoughts, two unreconciled strivings; two warring ideals in one dark body, whose dogged strength alone keeps it from being torn asunder.”

One way to blunt the impact of everyday discrimination is through art, poetry, music, and dance. Black people have used these media to survive the horrors of chattel slavery, emancipation, Reconstruction, Jim Crow, and other forms of racial marginalization. Wilding made herself vulnerable, diving into the trauma of Black suffering in search of her voice and in the hopes of healing. But she is not alone in her efforts to capture the brutal reality of life in the margins for Black people. She has an entire artist community that came before her, and many more will continue to fight against systemic racism through expression of art alongside her.