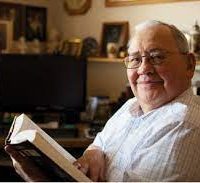 RICHARD CRACROFT, Nan Osmond Grass Professor in English at Brigham Young University, is one of the most important and active critics of Mor￾mon literature. With Neal Lambert he has edited two anthologies of Mor￾mon Literature, A Believing People: Literature of the Latter-day Saints (Provo, Utah: Brigham Young University Press, 1974; online at http://hu￾manities.byu.edu/MLDB/abp-toc.htm) and 22 Young Mormon Writers (Provo, Utah: Communications Workshop, 1975). Cracroft continues to write nu￾merous reviews of Mormon literature in a regular column in BYU Maga￾zine and in other venues of Mormon criticism. A past president of the As￾sociation for Mormon Letters, he teaches Literature of the Latter-day Saints at Brigham Young University, where he currently serves as the di￾rector of the Center for the Study of Christian Values in Literature.

Fiddlin’ Around in Orderville, or, A Mormon on the Roof: The Order is Love by Carol Lynn Pearson

The Discomforter: Some Personal Memories of Joseph Fielding Smith

On the Way to Obsession: Surely The Night by Claire Noall