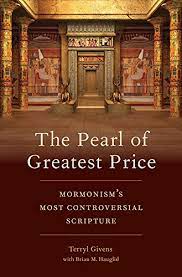 Givens and Hauglid are direct: their goal is to provide a sustained, academic, and nuanced treatment of the Pearl of Great Price [PGP]. Their motive lies in the fact that this volume has received relatively little in terms of such engagement compared to the Book of Mormon and the Doctrine and Covenants, and their assessment that Mormonism “is absolutely inconceivable apart from this collection of scriptural texts [the PGP] that provided the faith’s theological core from the beginning” (4). In the course of the volume, Givens and Hauglid thus provide an amply researched and thoughtfully articulated history of the production of the PGP, as well as insight into the ways these components then reflect back onto Joseph Smith’s developing understanding of his own role as a prophet and seer whose work increasingly centered around an expansive notion of translation and its accompanying scriptural production. In this sense, The Pearl of Greatest Price is as much about the development of Smith’s prophethood as it is about the PGP itself, and it is this dual focus that, for me, at least, allows the book to succeed.

The Pearl of Greatest Price is structured around its own disparate components: the book of Moses (inscribed within the larger project of Smith’s translation of the Bible, and thus including Joseph Smith—Matthew), the book of Abraham, Joseph Smith—History, and the Articles of Faith. Each section examines the historical conditions of its composition and pays particular attention to its various doctrinal and theological developments. Givens and Hauglid provide a compelling reading of these texts, arguing that many of Mormonism’s distinctive theological divergences from mainstream Christianity are textually centered in the PGP and that without these marks of difference, the rise of Mormonism would be categorized in terms of a restoration of the primitive church rather than shifting into the continued novelty of a church grounded in ongoing revelation. Their treatment of traditionally problematic topics, such as the papyri of the book of Abraham and its accompanying images, is thorough and relatively balanced; I would have no hesitation recommending this volume to a reader interested in gaining a better historical grounding of the events and contexts, including the controversies, surrounding the PGP.

And yet, to focus on The Pearl of Greatest Price as a comprehensive, balanced documentary history misses the larger project Givens and Hauglid develop with respect to Smith’s own understanding of his divinely commissioned role. Throughout the volume, Smith’s own focus becomes increasingly textual: beyond the Book of Mormon, Smith finds himself drawn to projects he characterizes as “translation.” The evidence left behind from his efforts suggests that Smith’s concept of translation as a prophetic project began to extend, leaving behind concepts of strict word-to-word correspondence and instead expanding into oracular experience precipitated in some way through sustained, prophetic attention upon a particular text. The underlying question Givens and Hauglid bring into focus is this: what do these particular, divergent, canonized texts found in the Pearl of Great Price tells us about what Smith understood regarding the relationship between revelation and translation in terms of his own oracular voice and visionary project? It’s a fascinating lens through which to engage the PGP, and this thread of argumentation and exploration enriches the entire volume in useful ways.

One final thought: these questions concerning the relationship between history, theology, texts, and doctrine are particularly productive here when focusing on the PGP due to the book’s own inherent tensions. As Givens and Hauglid note, “The irony of the Pearl of Great Price is that it is the source, at one and the same time, of Mormonism’s theological treasures and its most vexing historical dilemmas” (273). It is this intrinsic irony at the heart of the PGP—the thrilling push of creative theology that only arrives through a history vulnerable to charges of fraud and deception—that informs the title of the book itself: The Pearl of Greatest Price. That greatest price—the flexible availability of revelation and its corresponding price of faith—grounds not only the PGP but the religion itself. It is a price well worth exploring, and The Pearl of Greatest Price proves to be an excellent guide for the journey.