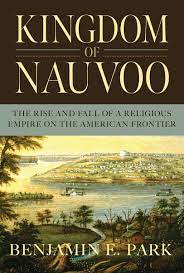 In an era awash in a sea of reboots and re-examinations, one may be forgiven for initially wondering why yet another treatment of Mormon Nauvoo is strictly necessary. The city, after all, has received its fair share of analysis over the years. Scholars examining religious persecution, Jacksonian economic policy, antebellum sexual practices, historical archeology, and even counterfeiting have all gravitated toward the city in turn. Fortunately, Benjamin E. Park’s recent addition to the ever-expanding literature, Kingdom of Nauvoo: The Rise and Fall of a Religious Empire on the American Frontier, offers a remarkable reappraisal of a story that many Latter-day Saints feel they already both know and understand. The Nauvoo Park paints is neither completely familiar nor comforting. But it is endlessly fascinating.

For many, the book’s analysis of Joseph Smith’s creation and use of the secretive Council of Fifty will be well worth the price of admission. Employing recently released documents from the Church of Jesus Christ of Latter-day Saints, Park details the decisive role the council played in helping the Saints seek a haven beyond the borders of the United States—primarily in Texas and Oregon Territory—as well as the ways in which members sought to reconceptualize the place of religion in nineteenth-century politics. What sets Park’s book apart, however, is not the verve with which the council’s doings are narrated. The real payoff lays in the way in which the reader is brought to understand why such radical political endeavors were contemplated and seen as rational by early Mormons in the first place.

Indeed, one of the reasons that Park’s book succeeds so admirably is that because under his steady hand, the story of Mormon Nauvoo is never about Nauvoo—or Joseph Smith—alone. Park does detail the rise of the Mormon kingdom on the Mississippi, from its first ill-fated, malaria-ridden years to its growing religious, social, and political prominence, as well as its eventual abandonment. Yet, in the end, he is much more concerned with what the experiences of Latter-day Saints in Nauvoo teach us about the contours of national belonging in the decades directly preceding the Civil War. Escaping the temptation to view the trials that the self-proclaimed Saints underwent in Nauvoo solely through the oft-employed lens of “religious liberty,” he reminds us that the story is also, at its root, a story about the “limits of American democracy” (278). In Park’s reworking, the story of Nauvoo becomes a rich meditation on the reasons why nineteenth-century Mormons felt compelled to rework the political and religious culture of their day and age in an attempt to erect a theocratic system of governance on the far reaches of the nation.

And it is here, in the rough-and-tumble world of early national American politics, that Park’s book truly shines. First introduced as religious émigrés into Commerce, Illinois, at the tail end of the 1830s, Park’s Latter-day Saints come across as a people still very much wedded to America’s political settlement. Following the example of countless US cities before, Joseph Smith sought out—and eventually obtained—an assurance of local protection through the creation of a liberal city charter. Recognizing the power of engaging in electoral politics at the local level (even as they increasingly set common politico-religious assumptions of the day at naught by largely voting as a bloc according to Smith’s will), Mormons continuously sought to improve their lot through the vote. Likewise, Park notes, Mormons made a concerted effort to petition the federal legislature in a daring yet doomed effort to receive both reparations and protection for the abuses they had experienced at the hands of Missourians just a short time before. Placed in such a light, Smith’s eventual run for the presidency of the United States looks a lot more understandable. As Smith found local, state, and national governments unwilling to protect Latter-day Saints in the ways he deemed essential, assuming executive power seemed the only way to assure reform that could reasonably be taken within the nation’s political system.

It also, in the end, helps explain Mormons’ increasing ambivalence toward the democratic process they were engaging. As governmental structures at all levels of society refused to accommodate Mormons’ pleas, nothing less than a rejection of the democratic process appeared reasonable. In such a milieu, Latter-day Saints came to believe that only government under God through divine priesthood promised the Saints the protection they sought. Only then would the literal kingdom of God on earth be realized. Even as Smith and others created a constitution within the Council of Fifty in an effort to flesh out their own theocracy, they went well beyond traditional American beliefs regarding the separation of church and state. And yet, even as Park emphasizes the breakdown in democratic processes that led Mormons to make the claims they did, the Saints never come across as completely unfamiliar. Indeed, it is a mark of Park’s wide-ranging mastery of his subject that he is both comfortable and capable of comparing Mormonism’s increasing suspicion of democratic governance to other social groups, such as abolitionists, making similar claims at the time.

Just as importantly, however, the book gives those who looked askance at Mormon politicking their due. Because Park centers his research on democratic discontent as a social phenomenon, the grievances of those beyond the Latter-day Saint pale are also concomitantly given more weight. Concerns over Mormons’ penchant for bloc voting make increased sense after reading Kingdom of Nauvoo, as does “gentile” fury over Mormons’ eventual assertion that the city of Nauvoo carried more sovereignty than other states in the Union. In an era beholden (at least in theory) to Jackson’s purported “common man,” the power that the Mormon kingdom sought to wield could appear threatening indeed. And, while some readers may find Park’s willingness to question the purity of Mormons’ political motives and practices disconcerting, it is a refreshing corrective to a field that still, at times, goes out of its way to excuse early Latter-day Saints for indiscretions both real and imagined.

While Park excels at uncovering the larger political significance of Nauvoo, he does not ignore the proverbial elephant in the room: polygamy. Indeed, the book is to be welcomed for the clear and cogent way in which it lays out the rise of a practice that Smith clearly attempted to keep secret—from the prophet’s initial forays into plurality to Hyrum’s and Emma’s campaigns against the principle (through use of the Nauvoo High Council and Relief Society, respectively). Perhaps most provocatively, Park argues that Smith initially introduced the doctrine of eternal sealings to deceased spouses in an effort to convince others, including Hyrum Smith, to accept the practice of celestial marriage.

Yet, even in these discussions of plural marriage, questions of democracy are never far from the surface. Throughout, Park employs Smith’s growing practice of polygamy to illuminate why non-Mormons came to see Latter-day Saints as a growing threat in the political arena. This is most forcefully discussed in relation to the political frictions that Smith’s destruction of the Nauvoo Expositor raised in Nauvoo and beyond. Though the paper was originally published, Park notes, in an effort to illuminate the prophet’s polygamous relations, its accusations did not stop there. Rather, its contributors also made their case against the upstart prophet by listing his abuse “of habeus corpus . . . making unholy alliances with politicians, directing the Mormon vote, and merging religious and civic spheres” (227). Uneasiness about polygamy was never only about polygamy alone but also the health of democracy within both city and nation writ large.

The one area of plural marriage that deserves more attention than it receives, however, is the unfolding of the practice within Nauvoo itself. Understandably, Park chooses to focus his energy on explicating the role Smith played in the expansion of the principle. Yet, increasingly, as Smith unveiled the notion of celestial marriage to others within his inner circle, the foundations of broader marital and social institutions were being laid out. As such, a closer scrutiny of those beyond Smith who eventually accepted the prophet’s call seems in order. Why did Smith’s followers accept such heterodox views? Why did Smith choose whom he did, when he did, to enter into the practice? What, if anything, distinguished the women who were brought into relationships of plurality? Such questions often lurk just beneath the surface. To be sure, Park does not completely skirt such issues. He writes of Hyrum Smith’s growing acceptance of plurality, of Brigham Young’s first attempts to find a second wife, as well as the pregnancy resulting from W. W. Phelps’s polygamous union. Yet, a more sustained treatment would further cement in readers’ eyes the fundamental importance of the experimental practice in the rise and fall of Nauvoo.

Even so, such critiques may be overstated. For, in the end, Kingdom of Nauvoo is a tour de force of scholarship. It is also a remarkably good yarn. For both the style of its prose as well as its determination to analyze Mormonism through the lens of broader historical contexts, Park’s work is deserving of the highest praise a reviewer can give: “I’ll be using this book in my classroom for years to come.”