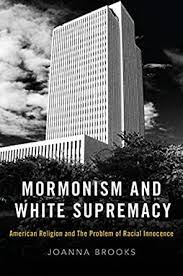 In Mormonism and White Supremacy Joanna Brooks sets out to tell the Latter-day Saint racial story refracted through the lenses of white supremacy and racial innocence. As she describes it, her book “seeks to use the tools of historical research and critical analysis to identify how anti-Black racism took hold in Mormonism” (p. 13). She hopes that understanding how systems of inequality were historically built within the faith will then help twenty-first century Latter-day Saints to dismantle them. Her book is consequently more about the present than the past—an incisive cultural critique of Mormonism’s fraught racial narrative aimed at moving the faith forward. This book should thus be viewed as an effort to raise awareness and prompt change more than a rigorous history of race in Mormonism.

In a series of mostly chronological chapters, weighted more toward the twentieth than nineteenth century, Brooks deploys “critical analysis” to unpack key events that developed into Mormonism’s racial priesthood and temple restrictions and their entrenchment behind walls of prophetic infallibility. For students of Mormon history the selected events will be familiar. This retelling is not based on archival research but is principally grounded in secondary sources and published documents. It is told from the vantage point of decisions made from within the faith without grappling with race as something also ascribed from without.

The strength of Brooks’ work is as a cultural critique grounded in her willingness to make the past relevant to the present. What emerges is a series of deep dives into moments of historical contingency wherein Latter-day Saint leaders had choices and consistently chose their own whiteness over equality and social justice. Her focus is not only on Latter-day Saint leaders who dug in their heals, but also on members such as Lowery Nelson, George Romney, George P. Lee, Byron Marchant, and Stuart Udall who stood up to the hierarchy and demanded change. Leaders had choices, in other words, and they chose white supremacy.

Brooks borrows from critical race theory to explain how these decisions were grounded in a “possessive investment in whiteness” which she argues was reinforced by a corresponding “possessive investment in rightness.” What that meant in practice was that Latter-day Saint leaders sought to bolster their own whiteness at the expense of their Black brothers and sisters. They reinforced their decisions by creating a narrative over time that suggested that Mormonism’s racial priesthood and temple restrictions were in place from the beginning, God put them there, and white leaders were not involved. As Brooks keenly notes, the narrative was built on a foundation of “racial innocence” that simultaneously blamed God for the restrictions and excused the white men who actually put the constraints in place.

Brooks’ most significant chapter covers the 1880s to the 1940s, a period wherein she describes the “institutionalization of white supremacy.” Here she traces the process whereby racial justifications became enshrined in Latter-day Saint curriculum. The institution thus produced, published, and taught racism and thereby ensured that it was passed on to the next generation. It is a compelling—if not painful—story and Brooks analyzes it well.

In that same chapter she introduces prophetic infallibility as the guardian of the newly enshrined narrative. Here her analysis misses a more complicated Latter-day Saint understanding of fallibility, one that has existed in tension with notions of infallibility over time. It is one of Mormonism’s unresolved paradoxes. Even Brigham Young, for example, sometimes seen as a strict authoritarian, warned his flock against “blind self-security trusting their eternal destiny in the hands of their leaders with a reckless confidence.” Other Latter-day Saint leaders have made similar statements, including as recently as 2013 when, as Brooks notes, Dieter F. Uchtdorf admitted to past “mistakes.” Rather than engage such paradoxes and how they might have shaped and even fostered some of the dissent she chronicles in the twentieth century, Brooks describes a monolithic notion of infallibility.

Of her two methodological tools, Brooks is much better at critical analysis than historical research. In fact, Brooks sometimes relies on sources such as recent newspaper articles more than archival research and as a result occasionally makes unsupported claims or factual errors. She draws upon a 2012 Salt Lake Tribune article, for example, to suggest that Robert Dockery Covington, one LDS bishop who helped to settle the Cotton Mission in Southern Utah “recounted to fellow settlers (according to a contemporaneous record) stories of his physical and sexual abuse (including rape) of African American men, women, and children. His statue stands today in downtown Washington, Utah” (p. 49).

The “contemporaneous record” was that of George Armstrong Hicks, a fellow settler of Southern Utah whose autobiography was published in 2011. Hicks actually suggests that it was Covington’s counselor, Albert W. Collins, also a former slave driver, who had a reputation for bragging about his previous violent exploits and his rape of enslaved women, not Covington. There is no statue to Collins in Washington, Utah. Hicks did call Covington a “Rebel sympathizer” and said that he “rejoiced whenever he heard of a Southern victory” during the Civil War. Perhaps Brooks would have arrived at the same conclusion about the settlement of Southern Utah had she read Hicks’ account, but her uncritical reliance on a 2012 newspaper article over Hicks’ autobiography leads to an unnuanced assessment.

Brooks similarly relies on two twenty-first century newspaper accounts (Deseret News and New York Times) for the lynching of miner Robert Marshall in Price, Utah, in 1925. She calls Marshall “an African American miner and a fellow Mormon,” (p. 60) presumably indicating that the crowd of over 1,000 people in one of Utah’s most ethnically and religiously diverse counties (sometimes called Utah’s Ellis Island for the number of immigrants from southern and eastern Europe who migrated there at the turn of the twentieth century) was comprised of Latter-day Saints who gathered to witness a coreligionist hang from a tree. There was no excuse for Marshall’s lynching. It was clearly wrong no matter the religious affiliation or lack thereof of those involved. But Brooks uses the event to assert Mormon white supremacy when neither newspaper source mentions Marshall’s religious affiliation or that of the crowd, and Brooks cites no evidence to support her assertion that Marshall was Mormon.

Brooks also goes beyond what historical evidence can support in her retelling of Abraham Smoot’s and Zebedee Coltrin’s testimony at the 1879 investigation into Elijah Abel’s priesthood. She describes Smoot’s involvement in the enslavement of black people in Utah and suggests that he took Jerry, one of his enslaved men with him to Utah County when he moved there in 1868. Jerry, however, drowned in 1861. More importantly, Brooks suggests that Coltrin and Smoot “jointly agreed to arrange their recollections to support a position opposing Black ordination and temple participation” (p. 45). In Brooks’ retelling, Smoot “effectively owned Coltrin’s land, home, and life chances” (p. 46) as he presided over the United Order effort in Utah County which included Spanish Fork where Coltrin lived. Smoot thus allegedly used his control over Coltrin’s assets to secure his cooperation in lying to LDS leaders in 1879.

To be clear, Coltrin’s testimony at the 1879 investigation into Abel’s priesthood was a misremembrance at best and outright lie at worst, something that historians have long noted. Even still, there are no surviving documents that support a prearranged conspiracy with United Order assets as the fulcrum. This retelling demonstrates a lack of understanding of the fluid nature of United Order involvement in the 1870s and does not include evidence from the Utah County United Order. Historians who studied the Utah County Order concluded that “There was no leveling in Spanish Fork or Pleasant Grove—no effort to take all resources into the Order and redistribute them according to need. Real estate was never deeded to the Order.” In evaluating Coltrin’s testimony, racism more than conspiracy seems to be his most powerful motivation, an assessment that would support Brooks’ overarching thesis without a need to go beyond the evidence. Because Brooks’ message is relevant and forceful, getting the history right matters so that the meaning does not get dismissed in the muddle.

Brooks’ ultimate goal is to know how to dismantle systems of inequality within Mormonism. A frank confrontation with the power of whiteness in Mormon history is one facet of Brooks’ hoped for dismantling. Her call to action is thus grounded in a rejection of racial innocence and proposes instead a racial reckoning—one that Mormonism and White Supremacy demonstrates is long overdue.