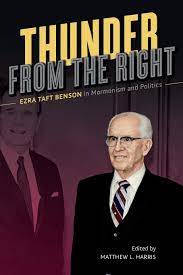 In the mid-twentieth century, Ezra Taft Benson was an important political figure who despised communism and feared that the United States was on the road to moral decay. He decried the rise of feminism and advocated for a full-throated embrace of patriarchy. The deeply controversial figure served as secretary of agriculture under Dwight Eisenhower while he was a member the Church of Jesus Christ of Latter-day Saints’ Quorum of the Twelve Apostles. Other members of the Quorum attempted to discipline Benson for allowing his political views to infuse his religious leadership. Starting in the 1960s, Benson became known as an advocate for the John Birch Society and other radical causes, even as he served within a religious institution that theoretically remained politically neutral.

Matthew Harris’s edited collection Thunder from the Right: Ezra Taft Benson in Mormonism and Politics places Benson within his historical context and analyzes the influence that he had on the LDS Church and the United States as a whole. The essays it contains explore Benson’s childhood in the small farming community of Whitney, Idaho, his tenure as secretary of agriculture, and his advocacy for the John Birch Society and far-right politics. The result is a tightly focused, well-argued volume that explores the tensions within the Mormon hierarchy over Benson’s political prominence and the conservative views he espoused.

Brian Cannon’s essay leads the collection with an examination of the relationship between Benson’s childhood in southeastern Idaho and his agricultural policies. According to Cannon, Benson saw the “family farm” as “an ideal incubator of virtue and democracy” (24). He believed, however, that individual farms must be self-sufficient and that some families needed to find other employment if they were on submarginal or less desirable land. The themes of self-sufficiency and suspicion of government aid found in this essay are important themes throughout the volume. Matthew Bowman’s article on Benson’s theology suggests that the Church leader came to see human agency as “fragile” (173). He feared that dependence on government aid would render individuals unable to exercise their free will. Although these ideas had not necessarily fully flowered during his tenure as secretary of agriculture, we can see their beginnings in his work during the Eisenhower administration.

Although Benson’s tenure as secretary of agriculture was important, Benson became best known for his advocacy of conservative causes and embrace of the John Birch Society. Several of the essays explore Benson’s political ambitions and his embrace of right-wing causes. Gary Bergera’s article traces the origins of Benson’s claim that Nikita Khrushchev told him that the Russians planned to slowly introduce communism into the United States, while Robert Goldberg examines Benson’s attacks on the “creeping socialism” of the 1960s and ’70s. Matthew Harris’s article on Benson’s rejection of the civil rights movement reminds us of the effects that his conservatism had on Utah and Idaho. His suspicion that Martin Luther King Jr. was a communist contributed to Utah’s refusing to recognize Martin Luther King Day as the name of the holiday until 2000 (140). The volume of essays will prove important for scholars seeking to understand the conservative politics of the Church of Jesus Christ of Latter-day Saints and the Intermountain West. It also raises important questions about the Church’s role in politics. Newell Bringhurst’s essay creates a portrait of a man who desired political power but was constrained by the desires of the president of the Church. J. B. Haws suggests that Benson was also a much milder figure than people feared when he became the Church’s prophet. Ultimately, the conservative backlash that many worried would accompany his presidency did not occur.

Like all projects, however, the book left some questions unanswered. As I was reading, I found myself wanting fuller attention paid to Idaho. In the book, Idaho becomes a stand-in for a conservative, rural upbringing that emphasized the importance of the family and community. I wondered how much this image fully captured the nuances of Idaho history. The Union Pacific Railroad contracted large numbers of immigrant men to work in its railyards throughout the state. In 1905, radical unionists assassinated Idaho’s governor and miner’s strikes were not uncommon in the region. During Benson’s tenure as a county extension agent, he would have had to deal with increasing concerns about the amount of labor needed to produce sugar beets and the advisability of using migrant labor for the task. A fuller examination of Idaho’s history would have brought into light whether or not Benson engaged these issues, and if so, how they influenced his understanding of politics and religion.

As a women’s historian, I also wanted more gender analysis. Andrea Radke-Moss’s “Women and Gender” is a welcome addition in this regard. Most of the essays in the volume touch lightly upon the experiences of women and questions about gender roles. Radke-Moss, however, takes the question of how Benson imagined the family as her central focus and argues convincingly that the proclamation on the family may be one of Benson’s lasting contributions to Latter-day Saint culture and theology, even if it was published after his death. As a scholar of women and gender, I appreciated her deft handling of Benson’s decision to enter into a polygamous marriage by having himself sealed to his cousin Eva after her death and her willingness to explore its ramifications for Benson’s wife Flora.

Reading her essay, however, raised uncomfortable questions. I found myself wondering, for example, what might have happened if more women had been included in the anthology. What questions might they have asked about the role of women in the John Birch Society? What might they have uncovered about Flora’s role in DC politics? What might be gained by comparing Benson’s understanding of masculinity to that of other members of the Quorum of the Twelve? A more diverse list of contributors that included people of color, women, and individuals from the LGBTQ community might have produced a very different edited collection.

Of course, the field of Mormon studies makes recruiting these contributors difficult. In 2018, I helped organize a roundtable on the experiences of women within Mormon history. It became clear that Mormon studies needs to do more to cultivate scholars from a diversity of backgrounds. This anthology reflects the field as a whole and, in addressing questions of race and gender at all, is doing more to address questions of diversity than some other works.

It also points to the reasons why Mormon history is sometimes homogenous. General authorities like Benson emphasized the importance of the patriarchal family and distrusted the civil rights movement. As a result, places like Idaho and Utah could be inhospitable for people of color, the LGBTQ community, and feminists. Most scholars of Mormonism come from this region. The histories that they write are shaped by the stories this anthology tells. This anthology traces the histories that created the world scholars of Mormonism inhabit, and for that, it is to be commended. The racism, extreme conservatism, and sexism evidenced in this volume have not completely dissipated from Mormon culture, or from that of Idaho and Utah, and it is important to tell the stories behind our own troubled present.