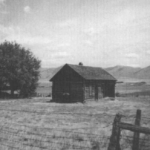 This article is an examination of the Mormon doctrine of eternal progression within the context of big-bang cosmology, a description of a finite universe that appears to contradict that doctrine. I argue that a multiverse cosmology, a theory that posits a multiplicity of universes, resolves many of the problems posed by big-bang cosmology.

“Seven and half blocks east and five blocks south of the Salt Lake Temple, the 0,0 of the city’s cardinally aligned grid, an inconspicuous gate on the north side of the street opens onto a long path that leads to what was once the backyard of Thomas B. Child. A stonemason by trade and Mormon bishop by calling, Child spent many of his spare moments between 1945 and 1963 designing surreal and sacred sculptures and engraving poignant aphorisms into stone tablets, gradually creating one of the most unique (and, even to most Mormons, unknown) collections of folk art in the United States.”

Enoch is able to focus his surprise at God’s unexpected emotion intoquestions which disclose, even after his previous visions and hisachievements as a prophet, what is for him an entirely new understand-ing of the nature of God. The answers to Enoch’s questions reveal a con-cept of God which, I believe, is the essential foundation of all Mormontheology, one that makes our theology radically different from most others.

“I often muse what I would do if I were God. Would I first stop wars, eliminate hunger and disease, make people loving and caring? I think not. Though the prospect is appealing, I know that we are here to work out problems. If we had no walls to climb, no boulders to move, we might as well have stayed in heaven and be done with it. I would consider, instead, some of the things that God is alleged to have done or commanded us to do. Which would I approve of, and which would I not — if I were God?”

For most Mormons tend to think of their theology as a relatively constant, unchanging set of doctrines and beliefs, influenced little by social environment.