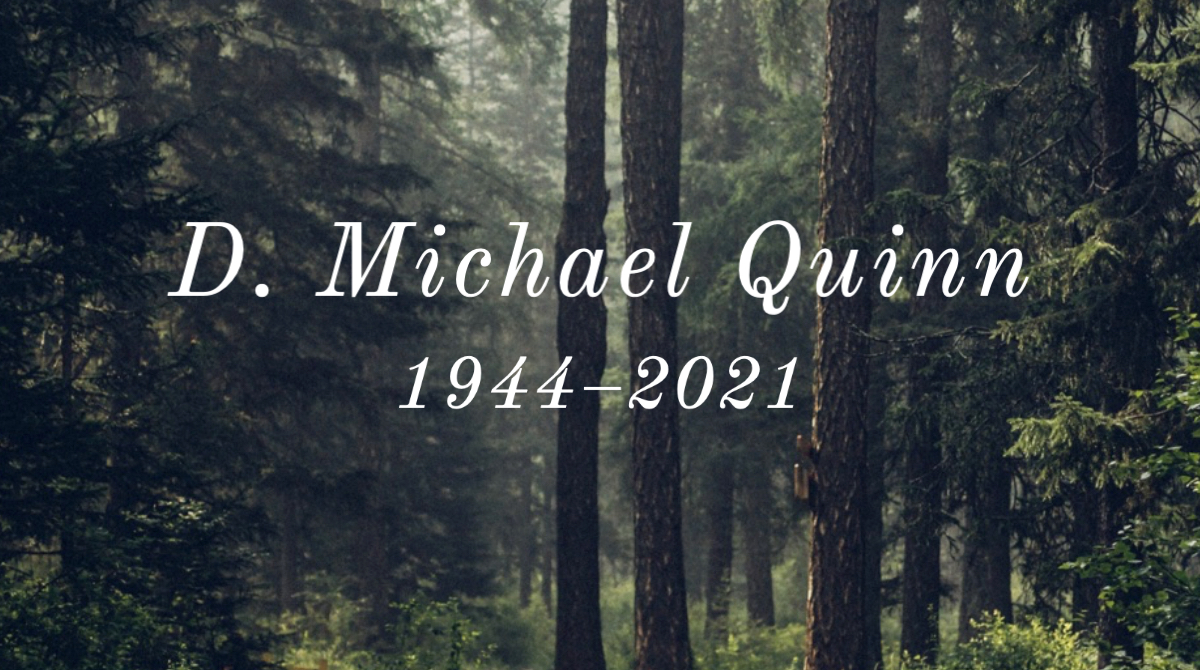 D. Michael Quinn (1944–2021) was a stalwart scholar of Mormonism who found an academic home in the pages of Dialogue. We honor his legacy by collecting his articles on this page. His work in Dialogue shows three threads of research: the narrative of early plural marriage and sexuality, Church authority and power, and the twentieth-century political influence of Church leaders. The articles share robust and critical citations to numerous archival material and exhaustive work performed by Quinn. Quinn also served on the Dialogue editorial board.

Quinn was a prolific author of original scholarship and a devoted responder to critiques of his work. In the letters to the editor section of numerous issues of Dialogue, Quinn responds to those with questions and interrogations to his arguments. His letters to the editors and notes and comments are found in Fall 1985 (responding to letters on his Spring 1985 article on plural marriage), Winter 1993 (responding to critiques of his Summer 1993 article on internal and external politicking during the time of Ezra Taft Benson), Spring 1995 (replying to Jeff D. Blake’s response to his argument about Ernest Wilkinson and the 1966 BYU Spy ring in Quinn’s Summer 1993 article), Summer 2002 (articulating his frustration with Biblical literalism and a critique of his article on the Church’s political involement with gay marriage), Summer 2007 (publishing his cover letter for his online-only published article on Joseph Smith in 1820), and Fall 2008 (replying to a critic who returned to his Spring 1985 article on plural marriages).

Quinn’s first full-length article for Dialogue focused on the Mark Hoffman-forged blessing. Although this document would later be proven to be a forgery, Quinn applied his historical knowledge and reasoning skills to it, determining how the document might fit into the history of Mormonism and what it might mean to that history.

In this article, Quinn published on one of the scholarly themes of his career: Mormon institutional authority and power. This article traces the growth of the Church from Joseph Smith’s managerial style to the bureaucratic emphasis in the then-contemporary Church system headquartered in Salt Lake City, Utah. In this article, as well, we can see the percolating of what will become Quinn’s monumental three-book work on Mormon power.

Continuing to catalog and document the narrative of the Church’s relationship to power and organizational behavior, Quinn turns to the Church’s move away from pacifism that occurred between the leadership strategies of Joseph Smith and Brigham Young. Whereas Joseph Smith, especially in his revelations, seemed to favor a selective pacifism, Brigham Young, especially after the Mormon Battalion, moved away from Smith’s pacifism and toward an anti-pacifism, if it benefited the Saints.

This article is one of Quinn’s prolific pieces for Dialogue in which, through 94 pages and a vast amount of sources, Quinn details the plural marriages that occurred after the Wilford Woodruff Manifesto in 1890. Plural marriages continued, abated and unabated, through those who were connected to the mainline church in Utah, even though the leaders of that church hurriedly and quickly disavowed the practice as the will of the prophet, the Church, and God.

Moving forward in Mormon history to the more contemporary mid-twentieth century, Quinn navigates the political conflicts of the 1950s to 1980s featuring Ezra Taft Benson, his conservative politics, and the Church’s public stance. A heralder to works like Matthew Harris’s Watchman on the Tower: Ezra Taft Benson and Making of the Mormon Right, Quinn’s efforts helped to grow a thread of scholarship that looks at the Church’s twentieth century history in relation to political power in the United States.

A primer to his 1997 book-length study on same-sex dynamics in early Mormonism, this article provides a close and intimate look at some Mormons who lived during the 1800s. From this work, Quinn begins to extrapolate and examine the existence and prominence of same-sex relationships throughout early Mormonism and how the Church at that time reacted to it.

Returning to his work on plural marriage, Quinn looks this time at plural marriage within fundamentalist groups, groups that refer back to Mormonism but are not still closely affiliated with the Church of Jesus Christ of Latter-day Saints.

“Prelude to the National ‘Defense of Marriage’ Campaign: Civil Discrimination Against Feared or Despised Minorities,” Fall 2000, vol. 33, no. 3.

Turning to his efforts to account for and narrate the growth of power and authority, hierarchy and organization, within the Church of Jesus Christ of Latter-day Saints, Quinn turned to more contemporary history that surrounded the fight for gay mariage.

Continuing his dive into the Latter-day Saint hierarchy, Quinn published a comparative article on Latter-day Saint “Headquarters Culture,” meaning the culture of the Church at its central location in Salt Lake City, and the rest of Mormonism. He related the growth of power, bureaucracy, and organizational cohesion at local and bureaucratic levels in the Church.

During the 2000s, Dialogue moved to publishing working papers of articles online, along with longer articles that couldn’t be accommodated by the restrictions of printing. Quinn joined this move online by publishing the third paper in the series. Quinn’s article mediated between two sides of a debate about what Joseph Smith meant when he talked about the religious fervor in upstate New York in the early nineteenth-century.

Quinn’s work on polygamy, which led him to his foundational piece on early same-sex relationships in Mormonism, and his work on the Church’s organizational system and power, which led him to his three-part the Mormon Hierarchy series, showed his prowess as a historian. He was able to gather massive amounts of archival material and synthesize them together—his footnotes alone are blessings many times over for future historians who will continue to build on the work he provided. In 2018, Quinn spoke on his work at our lecture series, in which he discussed his crowning achievements in the Mormon Hierarchy series.

We will always be grateful for his life as a wonderful and caring human being, an intrepid scholar, and a foundational historian in the Mormon movement.