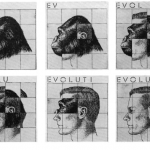 2010: Steven Peck, “Crawling Out of the Primordial Soup: A Step toward the Emergence of an LDS Theology Compatible with Organic Evolution” Dialogue 43.1 (Spring 2010): 1–36.

And in fact, what might it mean that God “used” evolution tocreate life’s diversity? Was this a choice for God among other al-ternatives? Do Wildman’s pessimistic conclusions hold for Mor-monism? Does evolution imply a noninterventionist Deity? Arethere more optimistic views possible, some of which may actuallysuggest that evolution enhances and expands our view of God?

“Any organism (animal or plant) living on Earth today or any organism that lived on Earth in the geologic past is largely the product of its genes, which in turn are inherited from two parents—or, in the case of asexual reproduction, one parent.”

The big question for me in this controversy is whether freedom of inquiry, with the agonizing ambiguity that accompanies it, will be sacrificed to the interests of those who demand certainty in the hope of salvation.

In postscript let me say that I have been accused of forging this letter and of taking unfair advantage of President Smith. Let the readers judge. I am personally grateful that the Church has not been caught in the position of taking a stand that might very well prove to be wrong in the future

Duane Jeffrey is to be thanked for his article, “Seers, Savants and Evolution: The Uncomfortable Interface.” It is an excellent summary of the history of thought on evolution in the Church. To illustrate its power, it made us very carefully reconsider our own anti-evolution bias and again perceive evolution as a possibility.

Blog post:
“Thoughts on the Interface between Mormonism, the Environment, and Evolution: Connection and Dilemma” by Clayton White