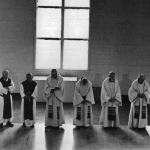 “Another difficulty, also related to new truths being revealed in familiar language, is that modernday scriptures occasionally make their points with phrases borrowed from the KJV, but taken out of context. Consequently, the Latter-day meanings cannot be read back into other versions of the Bible. This point is important enough to warrant three examples.”

“If we simply open our eyes and look about us, it would seem that Amos got it wrong. In societies insulated by affluence, where life runs in routine and moves by diversion, it is visible that the word of God is something most people get along very well without. But in the lives of individuals and societies, tragedies befall, the comforts of routine and the anodyne of affluence cease to satisfy, and people are at length obliged to look for what supports life at its foundations.”

“At the same time biblical Israel served as an exemplary model for those Christian thinkers and groups who took seriously the Old Testament example of life lived in faith, despite all catastrophes and sufferings, of the presence of holiness in the concrete world of nature and history.”

“The monotheistic theology of the Old Testament designated its God by either Elohim or Jehovah, although Jehovah predominates. Jehovah was not known as one member of a divine triad — either as Father or Son. Although comparisons might be made between Jehovah and the various divine paternal pantheons worshipped by Israel’s neighbors, Israel itself did not seem to consider Jehovah subject to any other god, paternal or otherwise.”

“Latter-day Saints demonstrate a perennial interest in health issues of all kinds, from the dietary role of meats to the therapeutic use of herb teas. At least some of this interest can be attributed to Mormon appreciation of the Old Testament, a feeling of kinship with the Jews, and a belief that the Law of Moses included a strict health code akin to the Word of Wisdom.”

“In the time of Isaiah, some eight hundred years before the coming of Christ, there was, of course, no Old Testament as we know it today. The five books of the Torah (the Law) were not assembled until about 400 B.C., and it was not until A.D. 90 that most of the final canon of the Hebrew Bible — the Law, the Prophets, and the Writings •— was decided by a council of teachers at Jamnia, thirty miles from the ruins of Jerusalem.”

“The Mormons of the 19th century saw themselves as a new Israel very much like the old. They appropriated ancient Israel’s sentiments and traditions, and its special status as God’s covenant people. For a Christian group, Mormons had an unusual affinity for the Old Testament.”v

“One of the notable intellectual activities of the 19th and early 20th centuries was development of the view that the Old Testament was a composite of ancient documents of varied age and source.”

Review of The Cambridge History of the Bible. Vol. I: From the Beginnings to Jerome. Edited by P. R. Ackroyd and C. F. Evans.

Review of You Shall Be as Gods: A Radical Interpretation of the Old Testament and Its Tradition. By Erich Froram.