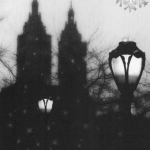 A poem about a grandfather watching his grandson experience Easter.

A poem about a man singing next to his enemy.

A review of a book about why Mormons banished the cross from the theology and iconography.

“Christ is arisen as he promised. Death no longer has dominion. He is present to us always and makes of our world an endless, material delight. He fills our mouths with laughter and fills the hungry with His own flesh and blood. Alleluia, alleluia.”

A poem about ranching sheep that follows Easter in it’s theme.

In “Who Brought Forth this Christmas Demon” Larry T. Menlove brings us a beautifully complicated story of two men trying to find their way in life with the backdrop of a Christmas tree lot in Payson, Utah. Also see Out Loud podcast reading here.

Rees gives multiple reasons why Mormons can find similiar theology and reasons to celebrate the Holy Week the same way other Christians do.

“Although it is traditional to read the whole of Luke’s Christmas narrative during the advent season, we often seem to forget the context Luke gives. This baby boy, Jesus, was born in the context of a brutally repressive regime—and at the bottom of its pile.”

“The crucifixion is considered by many to be the most profound and significant event in the history of the world—when God voluntarily descended to the lowest possible state to endure humiliation, excruciating pain, and shameful death to save mankind from sin and eternal death. Thus the cross, which has become the symbol of God’s love and self-sacrifice, adorns most Christian churches and is worn around the necks of many Christians as an emblem of faith and thanksgiving.”

The request to work a second year in the Salvation Army’s annual “Angel Tree” booth, a thoughtful community Christmas project enjoyed by church members, came during a thunderous downpour one Monday morning in December

Nor had we ever before received greeting cards on our (Jewish) holidays from non-Jewish friends and neighbors.

By now the Christmases of my life— all but one — have escaped restrictions of time and place and have arranged themselves, undated, in an intricate mosaic of memories, which can be instantly evoked by such small things as a scrap of tinsel or the smell of pine trees.

Four of my father’s wives lived at Provo during my childhood, a situation particularly fortunate for the swarm of Taylor kids. Santa Claus came twice to us, instead of just the single time he visited homes of those unfortunates whose fathers had only one wife. We were taught how blessed we were, to be among the very last to be privileged to live the fullness of”the gospel; and here was a tangible evidence

The afternoon of the banquet, in that unsettling lull between stacks of themes, I wrote “A Child’s Christmas in Utah.” I have tinkered with it since, but not much. Not enough, perhaps.

Music with a Christmas theme.