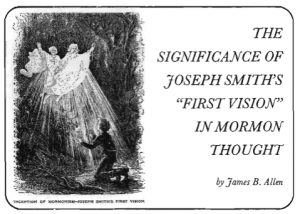 James B. Allen, The Significance of Joseph Smith’s ’First Vision’ in Mormon Thought. 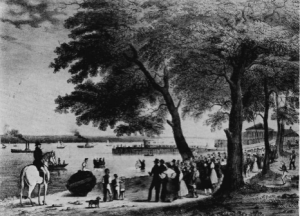 Harper discusses how the principles of memory may have influenced Joseph Smith as he recorded his multiple First Vision accounts. Harper essentially says that when we want to remember something our recollection is both affected by what actually happened in the past and also what is happening right when you remember it.

Stan Larson analyzes the 1832 account of the First Vision, which wasn’t known to the public for over a century. This account was locked away inside of Joseph F. Smith’s safe. At some point someone removed the 1832 account from the rest of the ledger between the years of 1935 and 1965. Only after it got removed did the general public first hear about it for the first time.

In “Another Look at The First Vision,” Larson mentioned that the 1832 account was orginally in Joseph Smith’s orginal ledger. At some point the account was removed from the ledger which was being kept inside of Joseph F. Smith’s safe. Larson claims that it was a proper archival practice for the removal of the account. James F Cartwright, a retired archivist, disucsses how archivists don’t take material out, they perserve it in a way that people would know who, what, and why it got removed.

Marvin Hill analyzes the main arguments against the First Vision made by both Reverend Walters and Jerald and Sandra Tanner who have published works that are crticial of the church. Some of the common themes shared by Walters and the Tanners draw upon the fact that the religious revival mentioned in the 1838 First Vision account more closely resembles the 1824 religious revival in Palymra.

Despite numerous attempts by crtics to try and contradict the 1838 account of the First Vision more than other accounts, members of the church have defended the 1838 account, which has made it part of the Church’s structural identity.

Marvin Hill discusses Dr. Sidney E. Mead’s work at the University of Chicago. Mead, a religion professor, focused on the two live movements which shaped Christianity specifically in the 18th century — pietism and rationalism. The author believes that these two movements shaped our church far more than we might think.

Ever since people first heard of the First Vision, the events surrounding it has been clouded by controversy. Peter Crawley comments with historical references that help to clarify this controversy. He compares the story behind Joseph Smith with the 19th Century Baptist preacher David Marks. Even though they never would have met, they have somewhat similar experiences. For them personally, religious experiences in the surrounding area were publicized enough that they would have heard about them in their own home towns.

Stanley B. Kimball comments on problems with dating the First Vision. He discusses how after Joseph Smith experienced the First Vision his immediate family still attended a local congregation. He comments on possible dates when they stopped going to the local Presbyterian church.

Richard Bushman uses semantic arguments and plausible circumstances to refute an article written by Reverend Walters in which Reverend Walters essentially claims that there was no revival in upstate New York in 1819 as Joseph Smith has said in his history. One pertinent example that Bushman mentioned in his response is that Joseph Smith used terms like “near” when explaining the revival culture surrounding him even when Joseph Smith was describing events that happened in distant towns.

Walters was the first to call into question whether there was a revival in Palmyrma, NY that corresponded to Joseph Smiths 1838 account of his personal history. No evidence could be found at the time.

Walters writes in response to Richard Bushman in this Roundtable discussion. Walters defends his own claim that the 1820 religious revival more closely fits the 1824 religious revival. He also responds to Bushman’s claim about the 1838 account. Bushman claims that the describing word “near” might not mean the Palymra area, but towns that are close enough so that the events could have affected the Smith family. Joseph Smith says regarding the revival that it took place in his neighborhood, so Walters questions how could the revival take place miles away and still be considered part of your neighborhood.

In this early article, James B. Allen shows that the First Vision was not well-known during Joseph Smith’s lifetime. It became well known after the prophet’s death, which is when missionaries started to teach about it for the first time.