I just want them to own the history 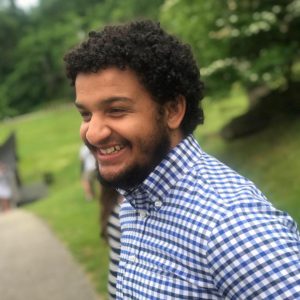 ustin Tyree is originally from Saint Albans, West Virginia. He received his BA in history from Brigham Young University and will graduate in May 2020 with his Juris Doctorate and Master in Public Administration degrees from West Virginia University. He hopes to be a public change agent and is dedicated to protecting the well-being and rights of all individuals.

What kind of encounters with racism and racist ideas did I have at BYU? Well, a friend and roommate of mine asked me if I was a “half-breed.” He was not trying to be offensive. It was a sincere question.To my friend’s ignorant statement, I calmly and in a somewhat sarcastic manner replied that I was not a horse and told him the term that was more appropriate was “biracial” or “mixed.”

As a missionary, I was called the n-word a number of times, but never had any experience like this while I was a student at BYU—which I attended from September 2013 to May 2015. As far as I can remember, I did not experience any form of blatant or implied racism from anyone affiliated with the school—be it student, faculty, or administrator.

I don’t think that I ever felt that I didn’t belong at BYU, but I was very much aware that I was a minority at the school. I couldn’t help but notice when I was the only black person in almost all of my classes—including those with more than 100 students. I would say it as a joke sometimes while I was on campus but at times I literally felt like a lone grain of brown rice in a bowl of white rice.

I definitely did notice that I never had a black professor or any instructor of color except for one Spanish instructor, who was Dominican. I would have appreciated having other individuals on campus who I could have identified with racially other than Anthony Bates, whom I knew from the Multicultural Student Services (MSS) Office. I love and appreciate and respect him tremendously, it just would have been nice to have more than one person to identify with in that way.My experience at BYU would have been much more difficult if not for my involvement in the MSS Office and the Civil Rights Seminar course. Being around other minorities in these programs, as well as with others who shared some of my socio-political thinking, made me feel much more at home on campus.

I have seen other black BYU students who struggle to fit in because of the small number of blacks at the school, as well as because of the ignorance of the other students around them. I’m sure other black students have experienced some racism or prejudice, but as I mentioned above I did not. I can’t imagine that white students ever feel out of place, racially, like myself and other black students have. But regardless of race, I’m sure many students feel out of place at times with the unique, and at times burdensome, culture that BYU has.

Something that has helped me deal with the racism I’ve encountered, including at BYU and in the Church, has been realizing and reminding myself that a lot of people are ignorant about people from other races, and that that ignorance fosters an environment of prejudice and racial superiority. I also have to remind myself that some individuals are indoctrinated with racist beliefs from an early age and some have continued to remain closed-minded as they have gotten older. Another thing that helps me is reminding myself that sometimes you just can’t fix stupid. No matter what you say or do, people can and sometimes do decide to remain ignorant.

If I could change something at BYU to improve the experience for black students it would be to just have more! It’s that simple. I feel like the school is getting better in that regard. I don’t know the exact numbers but I felt that there were more black students on campus when I graduated than when I started. I would love to see BYU create scholarships for students who have made significant achievements in their academic and extracurricular endeavors and come from underrepresented groups. Other institutions of higher learning have such scholarships and fellowships available (or more scholarships available) for racial minorities and/or students from less advantaged social or economic groups. I think that BYU loses out on talented and accomplished individuals who would greatly enrich the school.

What do I wish would change in the Church to improve the experience for black members?

I deeply wish that the general church membership knew about the Church’s stance on Blacks and the Priesthood. Generally speaking, no one knows about the Race and the Priesthood essay that the Church published several years ago. I wish the church would make a statement in General Conference referring to it, and/or summarize the essay’s main points in a letter to all Church units, to be read over the pulpit. I’m not asking for an apology from the Church. I just want them to own the history and make sure everyone is aware, the best they can, in order to dispel the inaccuracies, racism, and myths of the past.

I think I first learned about the Church’s history of racial restrictions when I was preparing for a talk when I was around 13 and planned to reference the book “Mormon Doctrine.” My father told me not to believe everything I read in the book. I asked why, and I think that’s what lead to the discovery of it all. At first, I thought it was weird, and read a number of books and articles on the subject, trying to come to some kind of understanding of why. I got to a place where I was comfortable and thought I understood it. However, much more anger and resentment came up when I did more research on the policy as an undergraduate and especially when I saw some of the racist statements and beliefs of Church leaders and BYU administrators in the 20th century.

It took a while, probably six months or so for me not to get burned up every time I saw Harold B. Lee’s portrait in the library. Eventually, I came to better accept that the leaders of the Church and BYU are men of their times, and those times consisted of very racist thinking and theology. I had to accept that I may never completely know the why about it all—but that Church leaders are human and make mistakes was a big part of it.