Video: Race, Lineage, and the 1920s-1940s Genealogical Society of Utah

As a complement to Dialogue’s fall 2018 issue commemorating the end of the Church’s race-based restrictions, we offer an audio-with-slides presentation by Stirling Adams of “Mormon Israelism and the Genealogical Society of Utah.”

His discussion breaks ground in showing the crucial role the Church’s Genealogical Society played in the 1920s through the 1940s in spreading and expanding lineage teachings in the 20th century Church. The author argues that without the Society’s remarkable teaching programs—unlike anything seen before or since in the Church—Mormon lineage beliefs and practices, including the racial restrictions, would have changed decades sooner than they did. 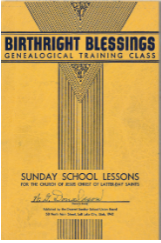 This is an expanded version of a presentation Stirling delivered during the July 2018 Sunstone panel titled “The Chosen Seed”: Reexamining Mormon Conceptions of Race and Lineage Forty Years After Official Declaration 2,” with Matthew Harris and Newell Bringhurst as co-panelists.